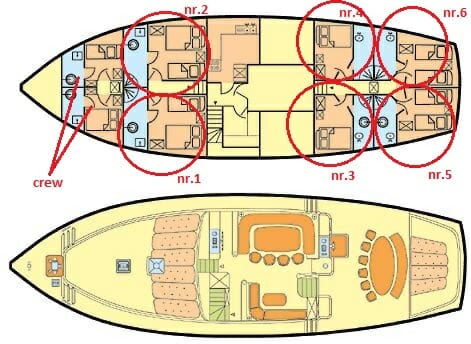 is the captain and owner of the gulet Morning Star. He was born on the 3rd of December in 1983. He attended a vocational high school to gain education as a shipbuilding technician, and then moved on attend the Faculty of Electrical Engineering, Mechanical Engineering and Naval Architecture in Split, earning the title of shipbuilding engineer. He moved on to earn his qualification as a yacht captain for yachts up to 500 GT.

He spent the next few years working as a crew member on yachts in Croatia, focusing on nautical tourism and learning from captains with many years of experience. In the summer of 2006, Domagoj became the owner of the gulet Atlantia, and he continued gaining experience as a captain and as a host. His hard work and dedication earned him and his gulet a great reputation. In 2015, he bought the gulet Morning Star and refitted it. With a new ship, Domagoj is proving himself as an excellent captain and his guests love him because of his cheerful attitude and kind manners. Domagoj speaks English and Croatian.

His family is connected to nautical professions, so he has spent his whole life connected to the sea. From an early age, he started spending time on boats, sailing, swimming and playing waterpolo. Nowadays, he spends most of his time working on his boat and business, but when he finds free time, he enjoys reading, spending time with friends and playing football. He is planning to get married soon, and his future wife has worked with him in his business. She has similar interests, she studied oceanography and marine research.

is the sailor on the gulet Morning Star. He was born on the 19th of March in 1988. He attended vocational high school for electronic technicians. After high school, he attended the Maritime Faculty in Split, getting a degree in nautical science, and a skipper license.

He has worked on numerous ships as a sailor and waiter, in several restaurants as a waiter, and he also worked as an electrician in the Split shipyards. In the recent years, he has joined his brother Domagoj in the family business. He has been helping with designing and maintaining the ship. During the year, he lives in Ireland, so his English is at an excellent level.

In his free time, he loves reading, music and traveling. He is a very friendly and cheerful person, and his love for travel and meeting new people makes him an

Accommodation on the yacht, 4 crew members, wages and food for the crew, Croatian VAT, fuel for main engines up to 4 hours cruising per day, fuel for 12 hours/day of generator use, complete linen and towels, yacht insurance, service on board, sojourn taxes, yacht cleaning, use of leisure equipment on board, WiFi.