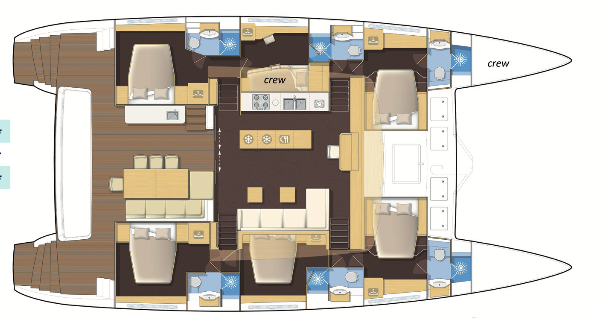 Captain Captain George born in 1970 in Famagusta, Cyprus and from an early age he showed his love for the sea and the boats. His child hobby to drawing boats after walks in marinas and harbors became a profession when in 1993 he acquired his first skipper diploma. He has combined his maritime studies, his passion for tourism and his love for the sea and sailing, to become a captain in pleasure yachts. He holds the RYA/MCA Yachtmaster Offshore Diploma, STCW95/10, Diploma of Offshore Sailing up to 24m from Hellenic Yacht Fed, Greek License for Powerboat up to 24m, Holder of Cyprus Seamen's Logbook, PADI Diving License, First Aid Certificate. He speaks fluent Greek and English. Chef Areti, a professional chef with experience in restaurants and hotels in Greece and abroad, is sure to offer you an amazing culinary experience. She specializes in Greek and Mediterranean cuisine, but has a broad knowledge of many food cultures. As she discovered her passion for cooking by preparing meals for her family, she continues to bring the same care and pampering to her guests. She is very attentive, organized, communicative and always greats everyone with a smile. She speaks fluent Greek, English as well as a little bit of French and German. She loves traveling and the sea and is in possession of an SSI Open Water diver's diploma, so she is more than equipped to handle anything from A to Z and offer you a memorable trip. Steward/Deckhand Phoebus is a cooperative and eager young sailor who will look after you with professionalism and courteousness to make sure you will have anything you need. His calm and alongside cheerful character will make you feel comfortable around him.Phoebus is in his senior year of studying mining and metallurgical engineering in National and Technical University of Athens. He is in the possession of Skipper's and Motorboat diploma as long as a Lifeguard's diploma and First Aid Certificate. He speaks fluent Greek, English and German. He has great computer skills and many free time occupations such as windsurfing, brazilian jiu jitsu, skiing, fishing and playing the guitar. He loves travelling the sea and is keen on a variety of water sports.